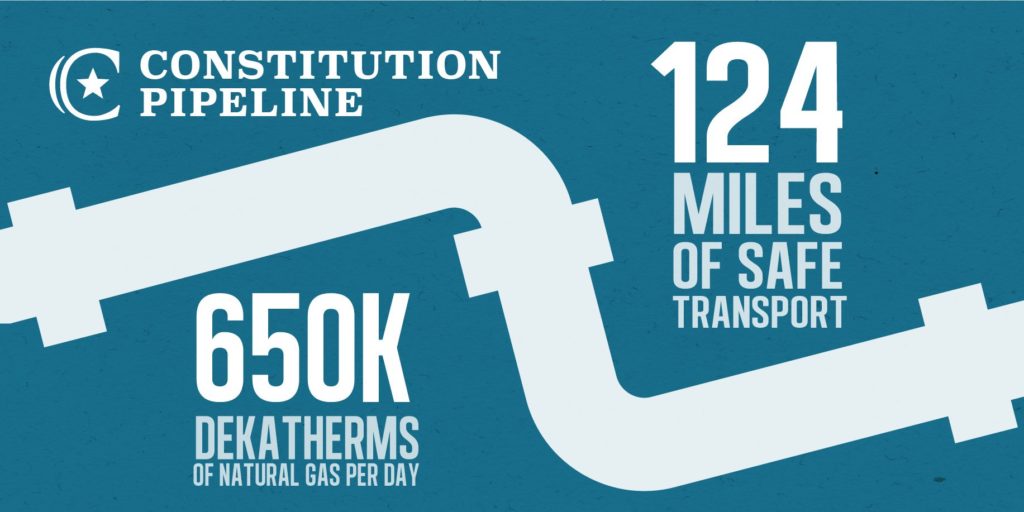 Approved by the Federal Energy Regulatory Commission in December 2014, the Constitution Pipeline has been designed to consist of a new 30-inch, approximately 125-mile pipeline with a capacity to transport 650,000 dekatherms of natural gas per day (enough natural gas to serve about 3 million homes) from the Marcellus Shale — the most abundant and cost-effective gas supply source in the nation. Once in service, the pipeline will be capable of directly and indirectly serve consumers throughout New York.

Via strategic connections to other existing interstate pipeline systems, Constitution will also be able to transport gas to neighboring regions, shielding New York from the dramatic market changes taking place in New England and the Mid-Atlantic. For example, electric power prices today are 60 % higher in New England today than in Pennsylvania, thanks to Pennsylvania’s access to low cost natural gas.

The FERC issued its Final Environmental Impact Statement on the project on Oct. 24, 2014, concluding that environmental impacts would be reduced to “less than significant levels” with the implementation of proposed mitigation measures by the company and FERC.

On Dec. 2, 2014, the Federal Energy Regulatory Commission issued an Order granting a Certificate of Public Convenience and Necessity for the Constitution Pipeline project (docket number CP13-499). To view the Order, click here. FERC issued this document to signify that approval has been granted to build and operate the pipeline. The certificate details the conditions of the approval, including the final route FERC has authorized, and construction and mitigation measures that must be followed.

On Aug. 28, 2019, the FERC issued an order finding that NYSDEC waived the water quality certification required under Section 401 of the federal Clean Water Act for the New York portion of Constitution’s interstate natural gas pipeline project.