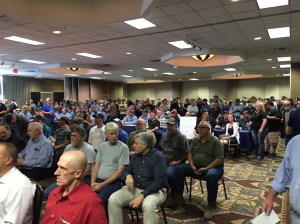 Broome County Executive Debbie Preston: “We already have other pipelines running throughout our community, so I don’t understand why there is a delay for the Constitution Pipeline. The Constitution Pipeline represents nearly a $1 billion investment in the region, with the possibility of creating thousands of jobs. This is exactly the type of investment we need in upstate New York.”

Bradford County (PA) Commissioner Doug McLinko: “Our county has witnessed first-hand the tremendous benefits of the natural gas industry and related infrastructure. By getting behind the Constitution Pipeline, New York has an opportunity to take advantage of what has the potential to be a real economic boost for its citizens and businesses.  This project will generate millions of dollars in tax revenues that will benefit local communities, and will allow businesses and manufacturing to continue to operate locally.”

LiUNA Local 785 Business Manager Dave Marsh: “It is important that our leaders in Albany understand the economic implications of denying permits needed for the federally-approved Constitution Pipeline. This billion-dollar investment in our region is a vital infrastructure project that will support thousands of much needed, high-paying jobs for our members in upstate New York. Our members want to work local. If we lose jobs locally, it doesn’t just affect the workers, it affects their whole families. A lot of families need this Constitution Pipeline to go through.” 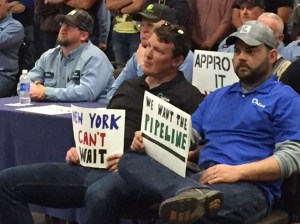 Oneonta landowner/business owner Marie Lusins: “I’ve lived in Oneonta for more than 30 years, and I can tell you we need private investment like this to help revitalize our region. Constitution is not just a pipeline, it is a lifeline for the Southern Tier. Businesses need clean, cheap energy to be attracted to and want to stay here. Our communities want natural gas to heat their homes. In supporting Constitution Pipeline, I am supporting economic growth in Otsego County and the Southern Tier.”

Constitution Pipeline received Federal Energy Regulatory Commission approval for the project in December 2014. The project is currently awaiting the Section 401 Water Quality Certification from the New York State Department of Environmental Conservation and the Clean Water Act Section 404 permit from the U.S. Army Corps of Engineers.

The project is projected to support about 2,400 direct and indirect jobs that would be have been created during pipeline construction, generating $130 million in labor income for the region. It is also expected to generate approximately $13 million in annual property tax revenue, most of which will benefit local school districts along the pipeline route.